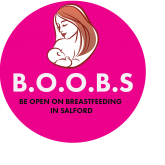 This blog first appeared on Little Lifts Babywearing and has been reblogged with permission.

I absolutely love a plan. It does not necessarily have to be my plan, I am happy to go along with anyone’s plan really, I’m not a control freak I just like to know what’s going on.

Cass is not into my plans and he makes this known. The uncertainty of parenthood is something that I’m still trying to get my head around, I just don’t know what’s coming next and I found this so hard in the beginning.

My birth plan had some, let’s say, last minute adjustments, as did our sleeping arrangements and my plans for introducing food didn’t go too well either. One thing I thought I was sure of though was breast feeding.

I found breast feeding tough. Initially, it was the pain. I was in so much pain I ended up exclusively pumping at three weeks. At five weeks though the pain eased and we got into the swing of things. It has been an absolute roller coaster of emotions and at times so tough. I thought I knew what I was doing but again, it was in no way like I imagined. I was very lucky I received a lot of support from the midwives at the Salford Birth Centre and at a local feeding group. Not many women have this, no matter how they choose to feed their child.

I had planned to feed Cass until he was two. I thought that this was a done deal, babies love milk and I thought it would be me who may eventually crack and have to change the plan. A couple of weeks before Cass turned one he started to lose interest when being fed, he was easily distracted and began to push me away. I initially thought it may have been his teeth coming through or the heat, but as the days went on I noticed he wasn’t really taking any milk apart from first thing in the morning, when he was really hungry.

Shortly after Cass’s 1st birthday I made the decision to stop feeding him breast milk. At the time I thought ‘Cass is ready, I am ready.’ I had given it 100% for a year. I thought I’d be celebrating. I wasn’t prepared for how hard it would be, it was really tough. My hormones were all over the place, my supply went into over drive I ended up getting mastitis pretty badly. It was so painful and the only advice I could find was to feed or pump through it.
I couldn’t feed Cass, I didn’t want to confuse him by making him take the milk just to ease my discomfort. Every time I pumped I could feel my milk come in and it was making it worse. I ended up on a course of antibiotics and tried to hand pump a small amount every couple of hours and eventually it died down.

Cass on the other hand was totally ready. I had prepared myself for screaming and crying at bedtime and tantrums through out the day. I thought he would struggle and we would just go back to feeding. But no, he’s not even asked. I thought co-sleeping would definitely cause us problems too, but if anything he’s actually sleeping (a bit) better. At last.

I do feel that stopping breast feeding so abruptly has a huge affect on your mental heath. My hormones were all over the place and I genuinely struggled. I think more women should be made aware if this. Mothers who choose not to breast feed at any point after labour must be going through these emotions, this on top of everything else is really tough and no one makes new mothers aware of it.

I try to not worry about the planning anymore. I’m just getting through one day at a time and enjoying every moment. I’ll waste my life away planning for things that may never come, it feels so liberating to just let go.